There are two common IR wavelengths used in CCTV applications today. IR or Infrared wavelengths are measured in ‘nm’ or nanometers, which are used to specify the wavelength of electromagnetic radiation near the visible part of the light spectrum. Visible light ranges from about 390 to 700nm. The IR in CCTV applications take over from there, commonly 850nm and 940nm, which allow us to see images that would normally fall outside of our visible range, thus IR Illuminator. These IR LED’s are used to produce, or improve ‘Night Vision’ capabilities for security cameras.

Although the IR wavelengths 850nm and 940nm, respectively, are fairly similar in performance, there are a few important differences worth noting. The use of IR LED’s in security cameras has become commonplace as technology has improved dramatically and cost has come down. Generally, the great majority of security cameras or CCTV Cameras are sensitive to the 850nm wavelength. Although the IR light is invisible to the human eye, the IR LED’s will produce a faint red glow when looking directly at the camera or source.

The main advantage of the 940nm wavelength is that the IR LED’s do not produce any visible glow. In other words, they are completely invisible and can be used in applications that are required to be more covert. In fact, many people refer to them as ‘Covert IR’. This type of IR is also useful in places where a red glow may be mistaken as a signal and can not be used. The disadvantage of 940nm is that they are about 30-40% less effective and will illuminate less distance. 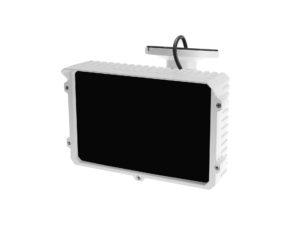 Most Security Cameras with built in IR LED’s, use an IR Cut Filter in order to maximize different lighting conditions during the day or night. During the daytime, the filter is on in order filter out Infrared Light, that way, color images are not distorted by IR Light. During the nighttime, the IR cut filter is automatically switched off to allow infrared light to enter the camera. The camera switches to IR Mode (Black and White) which is more sensitive to Infrared light.

IR technology has made great strides in recent years which is a great benefit to consumers and commercial CCTV users. SMART IR, Black Film Technology and STARVIS Sensors are among the exciting new Night Vision improvements in the surveillance industry. It is now possible to see extreme distances during day and night with high powered IR LED’s and IR Illuminators. If you are planning a CCTV Installation that requires night vision, it is certainly beneficial to understand the options that are available to you. At Ellipse Security, we are always ready to assist with your planning and design needs.

COVID-19 UPDATE: We are open and shipping.
We will be staying open for phone and online orders. We are dedicated to keeping supply lines open for our Dealers and essential services customers.