At least a few times a week we get a call that normally goes like this:

Customer: I love the cameras in daytime, but at night I can’t see anything at all.

Tech Support: Are you able to send a screenshot for me to take a look at?

Tech Support: It looks like there’s a bit too much of the wall in your frame. I’d recommend moving the camera to the left just a bit to get rid of the reflection from the wall.

Customer calls the next day to tell me that just getting the wall or other reflective surface out of frame cleared up their issue. I should mention that these calls aren’t ever a bother. We completely understand that this isn’t something that the majority of people would even consider to be the cause of an issue.

A majority of newer CCTV cameras use Smart-IR, or some variant. Essentially it’s an adaptive IR that will adjust the focus of the IR to either foreground or overall image. If you have someone walking up to an older camera in IR mode, there was a chance that the image could be blown out from the over-saturation of light. Smart-IR solves this by adapting the intensity depending on what’s in the frame of the camera, and where it is.

In our first example we have a fairly balanced image. There are a few things in the foreground that are a bit more reflective, but it’s not disrupting the image too much. 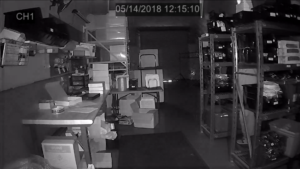 In this next image, I’ve inserted a piece of paper into the frame. You can see that it’s beginning to affect the image, and the way the camera is picking it up.

Here I’ve placed the paper even further in frame, and now the entire background is pitch black. Granted, this is really a bit of a silly demonstration. So let’s go to something more practical. 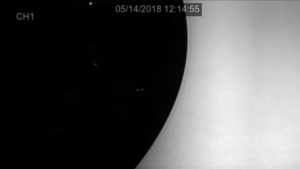 Here we have a camera mounted in a pretty normal position. There’s a bit of the wall in the frame, but nothing that’s really causing the image to be affected. Let’s move the camera a bit to the right and see how the image changes. 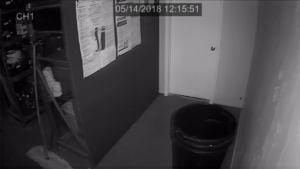 I do know that this is an extreme example, but this is exactly how reflective surfaces can affect your CCTV cameras in IR mode. Flooding the foreground with light, and basically removing the background. 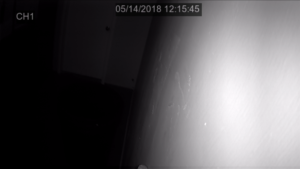 As stated in a previous entry, it’s always good to plan your system layout before you start drilling and running cables. Consider where you’re mounting your cameras, and make sure that there aren’t going to be any obstacles you need to plan around. Gutters, soffits, light-colored walls, etc… If you have any of those in frame, adjust your camera and you’ll most likely be in good shape. If you’re still having issues, you’re always welcome to give us a call. If you’re in the market for some new security cameras with Smart-IR, we have a wide selection. Just let us know what your needs are.

We Love talking to People about Security Cameras.